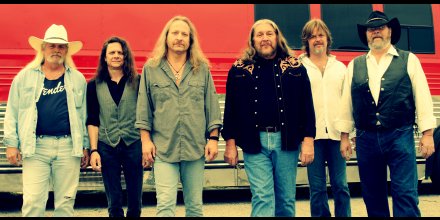 THE MARSHALL TUCKER BAND STILL SEARCHIN' FOR A RAINBOW…

In the early fall of 1973 The Marshall Tucker Band was still a young and hungry group out to prove themselves every time they hit the stage. Their debut album had already spawned numerous hits. The band’s recent release of their Live! From Englishtown album is a time capsule from that period. “We were a bunch of young guys who didn’t know any boundaries” says founding member and longtime lead singer Doug Gray. As it turned out, the collective talents of The Marshall Tucker Band took them very far indeed.

Today the band records on its own RAMBLIN’ RECORDS Label (distributed by Sony / RED) and continues to release new and previously unreleased material. For their most recent release, the band dug into the vault and emerged with the original live recordings from its biggest show to date. The new Live! From Englishtown album was originally performed in 1977 and reportedly drew more than 150,000 fans.

Still led today by founding member and lead singer Doug Gray, they represent a time and place in music that will never be duplicated. Gray is quick to credit the band's current dynamic members with carrying on the timeless essence of The Marshall Tucker Band sound. Current members include the highly respected drummer B.B. Borden, a former member of both Mother's Finest and The Outlaws, multi instrumentalist Marcus Henderson of Macon, Georgia, plays flute, saxophone and keyboards in addition to lead and background vocals, Pat Elwood on bass guitar, and Rick Willis on lead guitar and vocals, both of Spartanburg SC, are disciples of the Caldwell Brothers. Acclaimed lead guitarist and vocalist Chris Hicks recently rejoined the band after a two-year absence. Together they present a powerful stage presence as they continue to tour the country and continue to be powerful force in the world of music. The Marshall Tucker Band got its start in Spartanburg, S.C. when Gray teamed up with Tommy Caldwell and Toy Caldwell, Paul T. Riddle, George McCorkle and Jerry Eubanks, borrowing the name "Marshall Tucker" from a piano tuner whose name was found on a key ring in their old rehearsal space. In 1972, they signed with Capricorn Records, the same label that guided The Allman Brothers Band, Wet Willie, and others to national fame. The MTB opened shows for The Allman Brothers in 1973, and the following year, they began to headline their own shows across America due to the platinum-plus sales of their debut album. They toured constantly playing sheds, stadiums, theaters, fairs,
and festivals.

In years to come, The Marshall Tucker Band would wow critics and influence major country acts like Alabama, The Kentucky Headhunters, Confederate Railroad, and Travis Tritt with its definitive blend of rock, rhythm & blues, jazz, country, and gospel. Now, thanks to the expanding scope of today's music, a new generation of fans is learning what the rest of their fans have known for so long- that good music knows no boundaries. Along the way, the band has recorded twenty two studio albums, three DVDs, three live albums and many compilations. In 1980 Tommy Caldwell died as a result of injuries from an auto accident. In 1984 Toy Caldwell, George McCorkle, and Paul Riddle decided to retire. Doug Gray and Jerry Eubanks with the blessings of the other three continued to record and perform as The Marshall Tucker Band. In 1993 Toy Caldwell, who wrote the majority of their songs, passed away, as did George McCorkle in 2007. Jerry Eubanks retired in 1996 and Doug Gray continues to lead the current band of fine musicians winning new young fans as well as satisfying the loyal fans of several generations.
Years of rigorous tour schedules earned the band the respect of critics and countless dedicated fans. With hit singles like "Heard It In a Love Song," "Fire On The Mountain," "Can't You See," and "Take The Highway," The Marshall Tucker Band earned seven gold and three platinum albums while they were on the Capricorn Records label. During the 90's, the MTB scored four hit singles on Billboard's country chart and one on Billboard's gospel chart. Their music has also been featured on the soundtracks of movies such as Smokey and the Bandit, Blow, The Pursuit of D.B. Cooper, Shipwrecked, Crank 2, Don’t Mess with Zohan, Stop Loss, Swing Vote, Taking Chance and many others as well as many TV Shows.
“The buying public never really cared whether we were country or rock and roll" says Gray. "They called us a Southern rock band, but we have always played everything from country, jazz, blues, Rock & Roll and all things in-between. As we've become older," Gray grins, eyes twinkling, "our Southern heritage seems to come out even more. But no matter how old we get, we can still rock your socks off." Gray also notes that people have gotten "married and buried" to classic MTB songs like "Desert Skies" and "Can't You See". After 40 years, The Marshall Tucker Band continues to be played on classic rock and country radio, and they have never stopped touring.

More than 40 years after forming, The Marshall Tucker Band continues to tour, performing more than 130 live dates each year. In 2015, the band will continue their legacy as they hit the road and embark on the "Searchin' For A Rainbow Tour.” CMT (Country Music Television) named the MTB’s “Can’t You See” the #4 Greatest Southern Rock Song. The MTB’s debut album, The Marshall Tucker Band, reigns as Gibson Guitar’s #5 Greatest Southern Rock Album. UltimateClassicRock.com crowned the MTB's "Can't You See" as the #1 Southern Rock Song and in 2013, GRAMMY® Magazine named the group's logo as one of the most distinctive and iconic brands in music.


View Seating Chart For This Event »