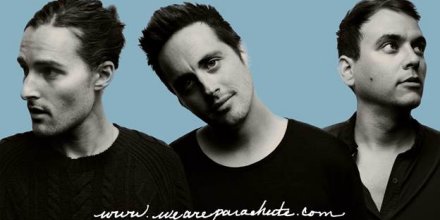 NOTE: This is a partially seated show. Tickets do not guarantee seats, which are first come, first-served.

For the members of Parachute, the name of their third album, Overnight, could well be a sly commentary on the hard work and commitment it’s taken for them to experience the success that’s been building over the last four years and first two albums. Their 2009 debut Losing Sleep featured the Top 15 single, “She is Love” (boasting more than 6.5 million views), while 2011’s The Way It Was included the #1 iTunes Rock Song “Kiss Me Slowly” (co-written with Lady Antebellum) and the Top 15 hit “Something to Believe In.”
Or it could refer to the late evenings put in by chief songwriter Will Anderson, burning themidnight oil, writing in his new Nashville base, after moving from the band’s hometown of Charlottesville, VA (where they were discovered and signed to Dave Matthews Band’s Red Light Management out of college). Anderson composed more than 50 songs for the album with a variety of collaborators, including Ryan Tedder (the first single, “Can’t Help”), as well as Grammy winner Chris DeStefano [Kelly Clarkson] and Ashley Gorley [Carrie Underwood, Keith Urban] on the title track.