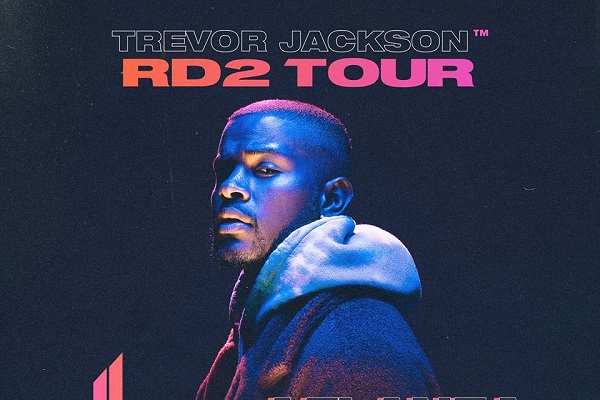 • All Ages Welcome
• Vinyl is a general admission, standing room venue
• Tickets available online via Freshtix.com or without ticket fees in person at the Center Stage Box Office, M-F, 11-6. Online sales end at 6pm on day of show

TREVOR JACKSON:
Indiana-bred Trevor Jackson is the definition of a triple threat. At the age of 20 years old, he has already made a name for himself as a successful singer/songwriter, dancer, and actor who believes in taking his career into his own hands. Trevor’s first steps into showbiz began with a three-year stint as Young Simba in Disney’s Tony Award-winning Broadway National tour of The Lion King. Following that success, he made his transition to television appearing on shows such as the SyFy original series Eureka, CBS’ Criminal Minds, Disney Channel’s blockbuster hit Let It Shine, as well as Harry’s Law for which he received the 2012 Young Artists Award in the category of “Best Performance in a TV Series – Guest Starring Young Actor 14-17.” In 2013, Trevor jump-started his music career by releasing his debut EP, #NEWTHANG [Atlantic Records], which delivered fan favorite tracks such as “Drop It” (Remix) [feat. B.o.B] and “Like We Grown.” The videos for these hits alone garnered over 7.5 million views combined and counting. Earlier this year, Trevor released his most personal mixtape In My Feelings [Atlantic Records], which was co-written by Trevor and his older brother, Ian. As a result of the chemistry that only family could channel, the project flowed seamlessly and garnered 3 million streams combined on SoundCloud and YouTube. The mixtape includes the hits “Bang Bang” which boasts a stunning cameo from Louisiana trap king Kevin Gates, “Simple as This,” an airy production that gives Trevor’s dynamic voice space to really shine and his latest single,“Rock WithMe” featuring IAMSU! Trevor has a number of major projects slated for 2016. This past January, he returned to the small screen as a series-regular on the second season of John Ridley’s ABC drama series American Crime, alongside André (3000) Benjamin and Emmy® award winner Regina King. Trevor stars in the Netflix Original Film "Burning Sands" and will be in the "Blackish" spin-off "College-ish". Additionally, Trevor will be releasing his highly anticipated follow up music project this year!